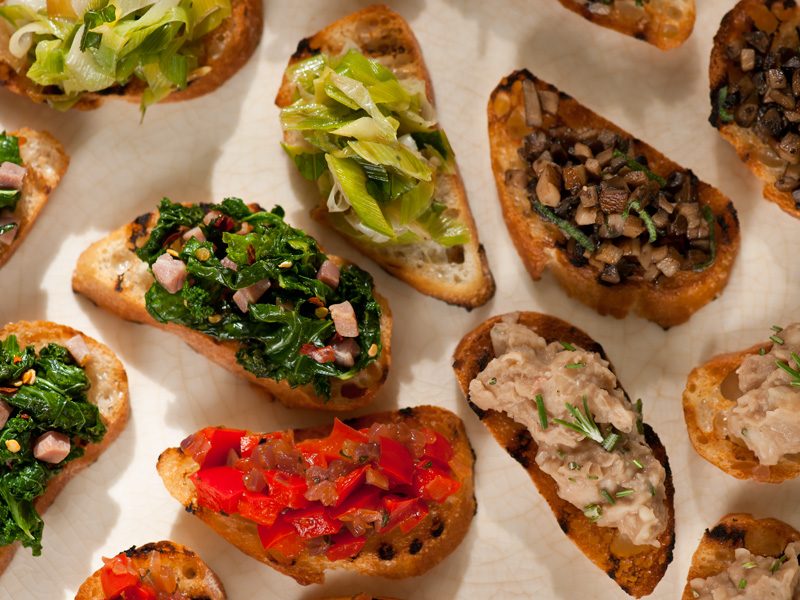 Last week we spoke about hosting your very own wine or beer pairing. As your last summer hoorah, we hope the tips and tricks we gave you were helpful and inspiring! We realize though, that one thing was missing…FOOD or, alternative food and pairing options. So, this week we’re going to chat about what should be a host’s bread and butter (literally): crostini.

As Martha Stewart says, Crostini is really just a fancy word for baked baguette slices. While this much is true, it is also the world’s most diversified snack and finger food, ever. When it comes to Crostini, nothing is impossible, and when you’re hosting a wine or beer pairing, Crostini is the way to go! Not only is Crostini super easy to make, it can satisfy a lot of palates and also serve as different “courses” of a meal. As an appetizer, it is easy to use a spread on your Crostini. As a main course, adding something hearty like meat and sauce is a good way to go. For dessert, custards, creams and fruit work wonderfully!

There are tons and tons of Crostini recipes out there. We found that Martha Stewart’s recipe was the easiest to follow and also provides topping recipes. So, bake on, friends!

Bake until golden, 15 to 20 minutes, rotating sheets halfway through (if undersides are not browning, turn Crostini over once during baking). Let cool on baking sheets. Top Crostini with desired toppings, and serve.

If you’re using the Crostini for a dessert, we obviously don’t recommend the salt and pepper!

As Martha suggests, if you’re looking for a little more flavor, try an infused olive oil.

Here are some of our favorite (and easy) combinations:

As you can see, Crostini is not only easy, it’s diverse too. Knowing how much work may be necessary for your pairing party we hope this recipe is easy and varied enough to keep each and every guest happy. If you’re looking to take your Crostini to the next level, here’s where to find a few more complex Crostini recipes/combinations:

About author: MOD
Prev
Next